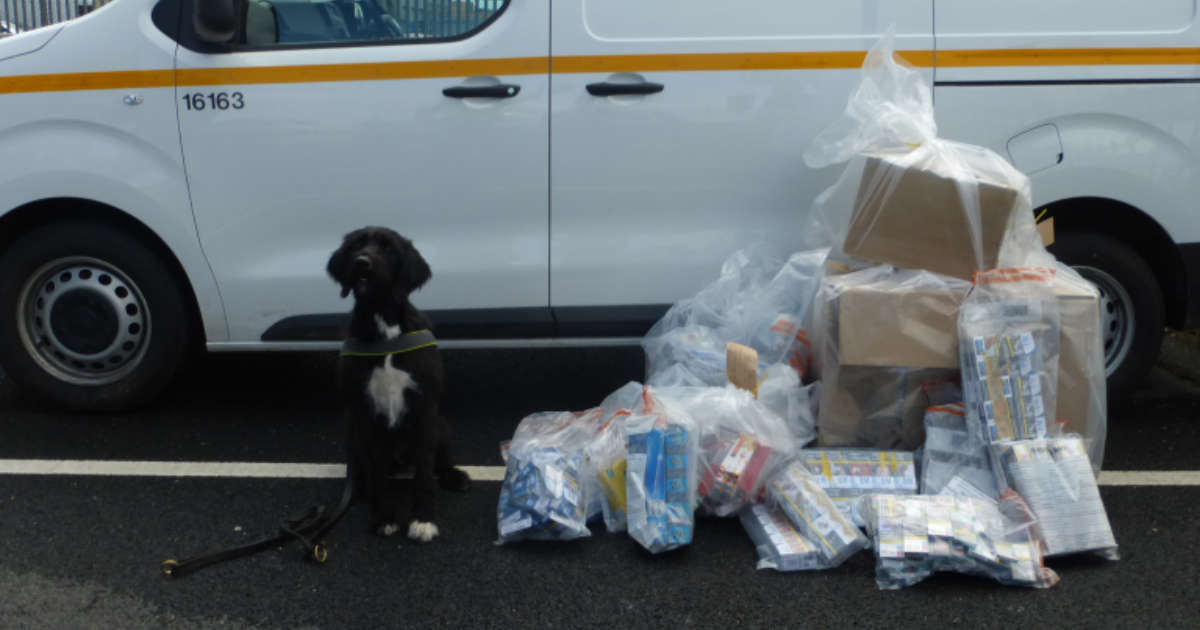 A dedicated detection dog called Boo has helped recover a haul of illegal cigarettes worth thousands of pounds from a shop in Fraserburgh.

Aberdeenshire Council’s Trading Standards searched two addresses in the town where an estimated 18,000 illegal cigarette products were uncovered in a residential property and a commercial premises on Friday, May 6.

Boo, who is a Lab German Wirehaired Pointer, "came into her own" during the search of a shop. The illegal contraband was hidden inside the empty casing of a printer, placed on the shelf in the storeroom of the shop. But heroic hound Boo sniffed out the secreted illicit cigarettes and vaping products.

A larger haul of illegal cigarettes was found in the property after Trading Standards obtained a warrant issued by a court to search the premises.

This was Aberdeenshire’s efforts as part of Operation CeCe, which is part-funded by HMRC, with the aim of tackling the supply of illegal tobacco and cigarettes.

David MacKenzie, Chair of the Society of Chief Officers of Trading Standards in Scotland, said: "This is an outstanding result for Aberdeenshire Trading Standards. Removing illegal tobacco from the marketplace protects consumers and legitimate businesses. They are playing their part in Operation CeCe Scotland, a joint operation between Trading Standards Services and HMRC, to combat illicit tobacco supplies.

"In addition, the intelligence gathered as a result will add to the national picture informing the work of other Trading Standards Services and HMRC.”

Investigations are now under way with a view to reporting those involved to the Procurator Fiscal.

Gordon Buchanan, Aberdeenshire Council’s Protective Services Manager said: “This is a great result. It is one of the largest seizures of illicit tobacco and tobacco products that we have had in Aberdeenshire to date, and the staff and boo must be praised for the careful planning and execution of the operation.

"Illegal tobacco is not a victimless crime, it is serious and organised crime which significantly harms our communities. This latest enforcement action demonstrates to local communities that the council will not allow these criminals to risk the safety of the residents of Aberdeenshire and the undermining of local businesses.”