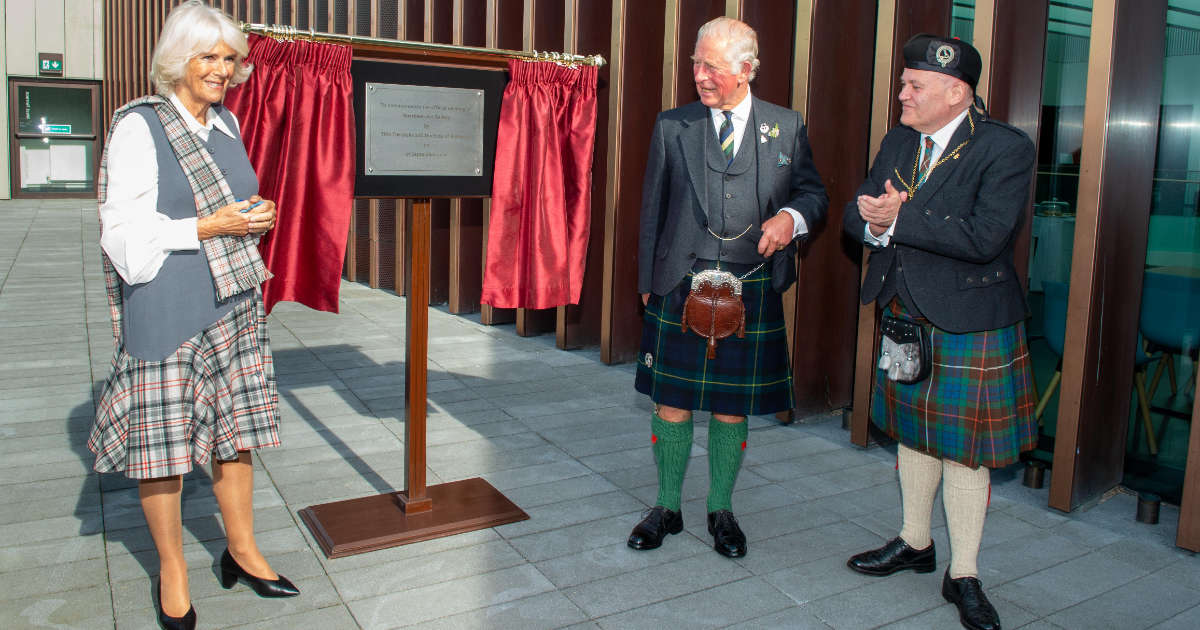 Duchess of Rothesay, Duke of Rothesay, and the Lord-Lieutenant of Aberdeen City Barney Crockett at the official opening.

Their Royal Highnesses The Duke and Duchess of Rothesay carried out the official opening of Aberdeen Art Gallery today.

Their Royal Highnesses were accompanied on their visit to the Art Gallery by the Lord-Lieutenant of Aberdeen City Barney Crockett.

The Royal Party toured the Gallery, where they met with staff and members of the team who delivered the landmark redevelopment of the Art Gallery between 2015 and 2019. The organisations represented included Hoskins Architects, Studioarc Design and the Friends of Aberdeen Archives, Gallery & Museums.

The project’s principal funders are Aberdeen City Council and the National Lottery Heritage Fund, with financial support from other government agencies, companies, trusts and foundations, many of whom were also represented on the day.

During the visit The Duke of Rothesay visited the Balmoral Phenomenon gallery where His Royal Highness viewed garments belonging to Frances Farquharson, the flamboyant former editor of Harper’s Bazaar, and chatelaine of Invercauld Estate, Braemar. She was known for her love of fashion and striking tartan ensembles. In 1996 a large part of her wardrobe was donated to Aberdeen Archives, Gallery and Museums.

The Duchess of Rothesay met pupils from Hanover Street Primary School, who have recently participated in the Art Chat project – together with curators and members of the Learning team, they looked at selected paintings on display, explored the stories and inspiration behind them, and recorded their responses which will be available for visitors to listen to on the Art Gallery’s +Music audio system.

Lord-Lieutenant of Aberdeen Barney Crockett said: “It is a tremendous honour to welcome Their Royal Highnesses The Duke and Duchess of Rothesay to carry out the official opening of Aberdeen Art Gallery. The Art Gallery is home to one of the finest collections in the UK, and the ambitious redevelopment project has created a safe, welcoming and inspiring civic space both for the people of Aberdeen and visitors to the city.