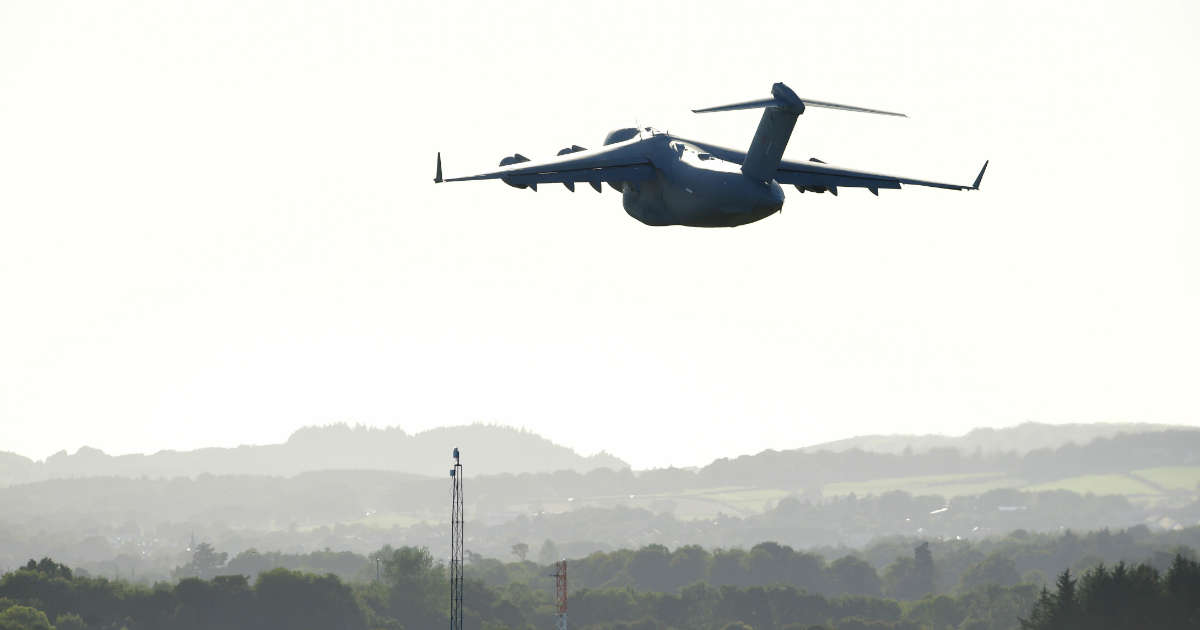 A RAF C17 aircraft, carrying the coffin of Queen Elizabeth II, takes off from Edinburgh airport (Image supplied by PA)

The plane which carried the Queen’s coffin from Edinburgh to London was the world’s most-tracked flight.

Flightradar24 said six million people attempted to click on the flight on its website within a minute as the C-17 Globemaster aircraft prepared to take off on Tuesday.

This caused “unprecedented strain”, according to the company, and caused the website to crash.

Flightradar24 said it had “implemented a number of traffic calming measures” before the flight as it “expected a large influx of users”, but the “immediate, massive spike was beyond what we had anticipated”.

The previous record for a flight was set last month when 2.2 million people tracked a plane carrying US politician Nancy Pelosi to Taiwan.

Flightradar24 said: “Even though our platform suffered under such heavy load, Queen Elizabeth II’s final flight from Edinburgh to RAF Northolt is by far the all-time most-tracked flight on Flightradar24 and will likely remain at the top for a long while.”

The aircraft had the callsign “Kittyhawk”, used for any military flight with the Queen on board. The Princess Royal accompanied the coffin on the flight with her husband Vice Admiral Sir Tim Laurence.

Anne said she was “fortunate” to be able to share “the last 24 hours of my dearest mother’s life”, adding: “It has been an honour and a privilege to accompany her on her final journeys.

“Witnessing the love and respect shown by so many on these journeys has been both humbling and uplifting.

“We will all share unique memories. I offer my thanks to each and every one who share our sense of loss.”

Prime Minister Liz Truss and Defence Secretary Ben Wallace were among the reception party at RAF Northolt when the flight landed shortly before 7pm.

The coffin was carried by a state hearse to Buckingham Palace, ahead of lying in state beginning on Wednesday night at Westminster Hall.