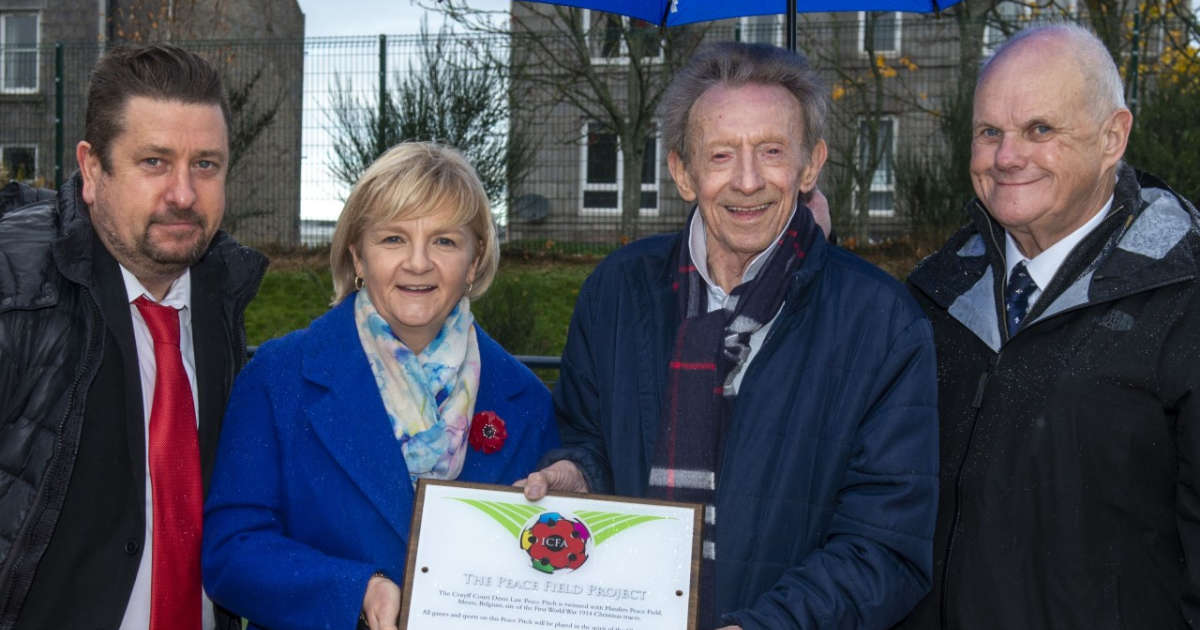 The site in Belgium is where rival troops came together in 1914 to play football during a pause in World War One hostilities.

The twinning is an initiative between Aberdeen City Council, Denis Law Legacy Trust, National Children’s Football Alliance and the Peace Fields Project and promotes the use of sport as a tool to bring people of all backgrounds and differences together.

The ceremony on Saturday November 20, which Denis Law CBE himself attended, included speeches from each partner, the Gordon Highlander pipers and a formal blessing of the Cruyff Court from Callum Shinnie from Kings Community Church.

22 pupils, two from each academy school in Aberdeen, then presented the poem “In Flanders Field” on the Cruyff Court before a Peace Pledge was officially signed to "create a lasting and impactful legacy".

Aberdeen City Council Leader, Councillor Jenny Laing said: "Aberdeen City Council is very pleased to be working in partnership with the Denis Law Legacy Trust, National Children’s Football Alliance and the Peace Fields Project to offer our young people the chance to be part of such an inspiring initiative.

"While there is often great rivalry in sport, history has taught us that sport is a great way to bridge the divides and bring people together. By participation in the Peace Fields Project and drawing up their Peace Pledge young people from schools across the city have come together to speak with one voice. Through the Pledge they have highlighted the importance of having safe and welcoming spaces where young people from different communities and backgrounds can come together and enjoy physical activity in a peaceful way. The council intends to use this project as a catalyst to ensure other areas of the city are just as inclusive, safe and peaceful."

Alistair Findlater, Chairman, Denis Law Legacy Trust, said: "The twinning represents the commemoration of war while simultaneously celebrating peace and the further education of young people both here, in Belgium and further afield.

"Thanks to Aberdeen City Council and the National Children’s Football Alliance for their partnership with us as well as the Gordon Highlanders and Royal British Legion for their presence today and continued importance in educating the next generations."

Ernie Brennan, National Children’s Football Alliance chief executive, said: "There are many monuments commemorating war; the peace pitch not only commemorates war, but celebrates peace. Sport is a brilliant way to bring people from all different backgrounds together.

"More than 10,000 young people have been involved in the Peace Field Project, twinning designated areas of play around the world with Flanders Peace Field, this event will inspire young and old, to play their games on their peace pitch in the spirit of the Christmas truces football games in 1914."

The Cruyff Court is used daily by the local community as well as on a weekly basis by Streetsport, the Trust’s flagship programme ran in partnership with Robert Gordon University.